Districts are increasingly joining with external providers—often charter operators—to implement “restarts” as one way to turn around persistently struggling schools. In a restart, a school continues to serve the same community, while its new provider receives operational autonomy in exchange for a contractual commitment to raise student outcomes. Our ongoing research has documented more than 200 such restarts in 16 states between 2010–11 and 2016–17, as leaders seek alternatives to closing struggling schools or allowing them to languish. 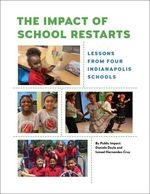 With restarts gaining traction, the field needs much better information and insight about the approach. How well are restarted schools performing?  What challenges have arisen? And what can leaders do to increase restart success?
In The Impact of School Restarts: Lessons from Four Indianapolis Schools, Public Impact’s Daniela Doyle and Ismael Hernandez-Cruz take a deep dive into the data from four restarts that started within Indianapolis Public Schools (IPS) between the 2015–16 and 2017–18 school years, as well as interviews with school and district staff. As researchers have documented elsewhere, the authors found mixed results in Indianapolis.

Given the small number of restarts and tested students included in the study, the findings from this analysis are not conclusive. The field needs more research on a larger and more diverse set of schools to more confidently identify what works, what doesn’t, and why.

The experiences of these four schools, however, point toward three lessons for districts, states, and educators to consider when restarting a school:

The Indianapolis research builds on Public Impact’s prior work on school restarts, which includes additional studies as well as practical tools for leaders implementing the approach. Those resources are available here.

Public Impact encourages the free use, reproduction, and distribution of our materials, but we require attribution. If you adapt the materials, you must include on every page “Adapted from PublicImpact.com; Copyright Public Impact” in the font size specified here.

Read Back Issues of our
E-Newsletter

Identifying Schools Achieving Great Results with Highest-Need Students—Needs Index
Working paper explains the methodology for measuring the extent of support that students need to thrive academically, and how to apply the resulting School Needs Index.

Learning in Real Time—How Charter Schools Served Students During Covid-19 Closures
Profiles highlight how charter schools were able to respond quickly to school closures during the pandemic and continue to serve their students well.

Building an Effective Staff—Profiles of Leaders of Color
Three-part series looks at how being a person of color affected the ways in which successful charter school leaders built schools where students, families, and staff learn, grow, and thrive.

Engaging Families—Profiles of Leaders of Color
Three-part series looks at how being a person of color affected the ways in which successful charter school leaders built schools where students, families, and staff learn, grow, and thrive.

Building a Strong School Culture—Profiles of Leaders of Color
Three-part series looks at how being a person of color affected the ways in which successful charter school leaders built schools where students, families, and staff learn, grow, and thrive.

The Impact of School Restarts—Lessons from Four Indianapolis Schools
Report analyzes how enrollment, demographic, and student performance data changed following the restarts of four charter schools in Indianapolis, IN.